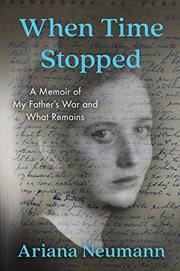 A Memoir of My Father's War and What Remains

When he learned that he was scheduled to be deported from Nazi-occupied Prague to a concentration camp, Hans Neumann took a brazen step: He hid in plain sight, assuming a false identity and going to work as a chemist for a supplier of the German war machine in Berlin. That daring feat alone might make his story unique, but there is much more to it. After the war—during which his parents and 23 other relatives were murdered by the Nazis—Neumann settled in Caracas, and he and his brother founded a paint company that became an international conglomerate. He and his glamorous second wife attained an enviable position in Venezuela: rich, cultured, well respected, and socially prominent. Neumann hid his Jewish roots, but the author, the couple’s only daughter, found an early clue to his erstwhile double identity when she stumbled as a girl on the fake ID card that had enabled him to work in Germany. Even then, she had no idea he was Jewish—“I was absolutely oblivious as a child”—and remained largely in the dark until her father died and left her a box of papers that held a memoir of his bold escape to Berlin. In this elegantly structured debut, the author reconstructs with considerable literary finesse the life of her father, who owned 297 pocket watches—a unifying motif and organizing metaphor that readers may see as his metaphorical attempt to replace time stolen by Hitler. She also offers vivid images of Terezín (renamed Theresienstadt by the Nazis), where her grandparents were interned before they died in Auschwitz. Because Terezín was nominally a transit and labor camp rather than a death camp, prisoners could send and receive letters and packages, and the author includes poignant excerpts of some of the letters.

A multilayered memoir written from the unusual perspective of a Holocaust survivor’s daughter who grew up in Latin America.