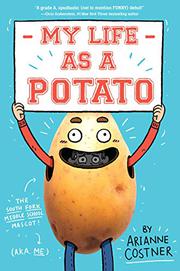 MY LIFE AS A POTATO

The new kid in school endures becoming the school mascot.

Ben Hardy has never cared for potatoes, and this distaste has become a barrier to adjusting to life in his new Idaho town. His school’s mascot is the Spud, and after a series of misfortunes, Ben is enlisted to don the potato costume and cheer on his school’s team. Ben balances his duties as a life-sized potato against his desperate desire to hide the fact that he’s the dork in the suit. After all, his cute new crush, Jayla, wouldn’t be too impressed to discover Ben’s secret. The ensuing novel is a fairly boilerplate middle–grade narrative: snarky tween protagonist, the crush that isn’t quite what she seems, and a pair of best friends that have more going on than our hero initially believes. The author keeps the novel moving quickly, pushing forward with witty asides and narrative momentum so fast that readers won’t really mind that the plot’s spine is one they’ve encountered many times before. Once finished, readers will feel little resonance and move on to the next book in their to-read piles, but in the moment the novel is pleasant enough. Ben, Jayla, and Ben’s friend Hunter are white while Ellie, Ben’s other good pal, is Latina.

On equal footing with a garden-variety potato.