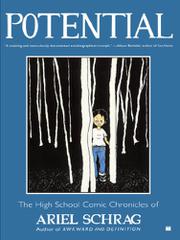 Schrag (Awkward and Definition, 2008, etc.) explores her junior year of high school, a period of self-discovery amid social minefields, all the more complicated for a gay student.

The second volume of the “High School Comic Chronicles” finds the author dealing with all sorts of personal challenges, both at home and at school. Her constantly bickering parents appear headed for divorce; she feels the pressure to realize her potential as a student; she confronts countless questions regarding her sexuality: Does bisexuality exist, or is it a cop-out? Is it necessary to have sex with a boy to lose one’s virginity? What does it mean when your girlfriend doesn’t desire you as much as you desire her? Since the author wrote the book during the summer following her junior year, Schrag’s fellow students were aware that she was chronicling their life as a graphic narrative. As such, the book becomes a kind of meta-comic, in which there are plenty of comments about what is and is not included. As the title suggests, identities are fluid rather than fixed, and the characters are in a state of becoming rather than being. Though Schrag’s classmates at California’s Berkeley High School may have been a little hipper than many throughout the country, most were equally clueless when it comes to figuring out who they really are and what they really want. There is plenty of sex here, somehow as innocent as it is explicit. This should be a breakout year for Schrag, with both a film based on this book and a third graphic volume documenting her senior year (Likewise) due within months.

A smart, sweet graphic memoir. Schrag’s work should resonate with anyone—female or male, gay or straight—who has survived high school.