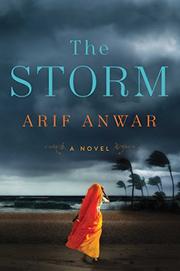 A trio of storylines centers around the Partition of India.

Anwar’s debut novel is an ambitious one, with threads reaching back to World War II, to the more-or-less present day, and to 1970, to the devastating storm that killed half a million people in Bangladesh. The novel follows several storylines and a scattering of characters, straining by the end to bring them all together. To begin with, there’s Shahryar, a young father who lives in Washington, D.C., but was born in Bangladesh. Shahryar’s visa is about to expire, and he’s desperately casting about for a way to stay in the country with his daughter, Anna. Then there’s Claire Drake, a British doctor serving in World War II, first in Burma, and then in what was at that time East Bengal. There’s also Ichiro, a Japanese pilot shot down nearby, whom Claire must treat. There’s Rahim, too, a wealthy Muslim man living in Calcutta with his wife, Zahira, as that city erupts into riots in the midst of the Partition of India. To say the least, there’s a lot going on. Anwar ups the ante even further with additional twists: Rahim is kidnapped by a Hindu gang, and Shahryar is caught up in what may or may not be a conspiracy. At this point, the book is practically bursting at the seams. Why Anwar shoved all these characters into one book is unclear: They would have done just fine each in their own respective novels. His prose doesn’t help matters. It is sometimes overwrought (“a valley covered in cloaks of mist run ragged in places by trees crowned with fall’s incipient fire”) and sometimes plainly lacking (Zahira’s response when the police appear in the nick of time: “You…how…what?”). Still, Anwar has an engaging voice that will perhaps improve with practice.

An overstuffed narrative and sloppy writing mar a novel that, despite it all, still has its moments.