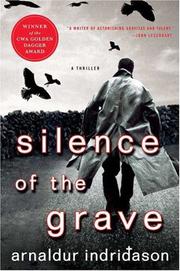 SILENCE OF THE GRAVE

The secret of a buried body reaches back generations to a grim murder.

A birthday party comes to an abrupt halt when a baby is found gnawing on a human bone. After the infant’s brother Tóti sheepishly reveals that he found the bone at a construction site down the street, stolid Reykjavík police inspector Erlendur Sveinsson (Jar City, 2005) cordons off the area as a crime scene, to the chagrin of the builder. An archaeologist determines that the female corpse has been buried for at least 40 years. Erlendur dubs the case the Bones Mystery. Bitterly estranged from ex-wife Halldóra, he learns that their drug-addicted daughter Eva Lind has landed in the hospital comatose and pregnant. When he’s not tracking down elderly neighbors and relatives of former residents of the house with the buried body, Erlendur undertakes a bedside vigil with another comatose patient. The doctors instruct him to talk to Eva, and he digs deeper and deeper into his heart to come up with things to talk about. Erlendur’s sidekicks, Sigurdur Óli and Elínborg, also grapple with personal problems. Meanwhile, a man named Grímur is terrorizing his battered wife and her three children in a subplot that has its own connection to the Bones Mystery.

This winner of the CWA Golden Dagger Award is a resonant psychological crime novel rich in unflinching observations about family relationships.