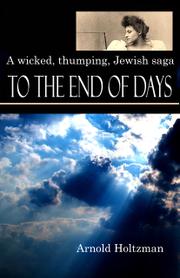 TO THE END OF DAYS

Readers first meet Avrum Vishinsky in 1898. Avrum is a 9-year-old boy in a small village in Poland that, due to hostilities with Cossacks and some bizarre circumstances involving heavy smoke, suffers a bloody pogrom. Avrum and his brother Hershel are the only villagers to survive. The brothers’ only hope for carrying on is to attempt to make it to a synagogue in Lvov. It is a lengthy and dangerous trek to Lvov and the two encounter an old woman who beats them with a fire poker. The woman even attempts to enslave Avrum while Hershel flees into the woods. Avrum’s salvation comes in the form of a lumberman named Iannuk. Iannuk takes Avrum under his wing, and the boy grows to become a powerfully built man of the woods. Eventually, Avrum secures passage on a ship to Montreal, and it is there that he will work, marry, search for his long-lost brother (who is rumored to have made it to New York City), and become a popular wrestler. Avrum’s tale is bizarre, though not unbelievable, and marked at points by raw violence. A scene involving a gang rape is brutal, showing readers that the New World could be just as unforgiving as the Old. But the dialogue is not always as imaginative as the physical confrontations. Avrum is initially hesitant to give wrestling a try since, as he puts it, “From the papers I know that wrestlers are half and half underworld.” And the members of that netherworld, with names like Horse and Zed Chicago, tend to speak exclusively in a clichéd gangster dialect, as when Zed explains: “I had a couple words with Horse. He said the kid should be good material and I tol’ him I’ll look’im over.” Despite such distractions, Holtzman’s (Dead-End Sex, 2016, etc.) story maintains a sense of excitement. What, in the end, will happen to Avrum? He is a man who has seen and survived so very much, and readers will likely be eager to know if he will ever find a happy ending.

An adventure full of surprises but hampered by uneven dialogue.