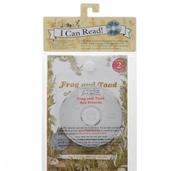 FROG AND TOAD ARE FRIENDS

A leggy green frog and a squat green toad do for friendship something of what Little Bear does for kinship. Come April Toad's reluctance to end his long winter nap ("A little more sleep will not hurt me") prompts lonesome Frog to pull off the calendar pages one by one until he reaches stay-awake May. Then there's "The Story" Toad can't think up when Frog is sick which becomes the story—of how Toad made himself sick standing on his head and hitting it against a wall trying—told him by a recovered Frog. "A Lost Button" turns up at home after Frog has found every button but for Toad (who makes suit-able amends). But the best is yet to come—in Toad's anxiety that he looks funny in his bathing suit (which keeps him shivering in the water) and his brusque "Of course I do" when Frog and the others laugh. At the last, affectingly if more predictably, is "The Letter" that Frog writes to Toad so he'll get some mail. . . and sends by snail. Imperfect friendship or it wouldn't be true—and most perfectly expressed in their faces.