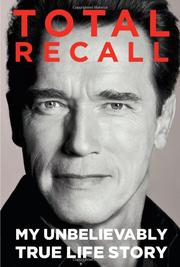 by Arnold Schwarzenegger with Peter Petre

In what reads more like a 650-page annotated résumé than a dishy celebrity memoir, the life story of Schwarzenegger (The New Encyclopedia of Modern Bodybuilding, 1999, etc.) seems to have been penned by his soulless celluloid alter ego, the Terminator. Born in Austria the son of a card-carrying Nazi, the author began idolizing bodybuilders as a youngster. After a slapstick-filled stint as a tank driver in the Austrian army, Schwarzenegger dove headfirst into the world of bodybuilding, flexing and posing his way to the Mr. Universe title by the time he was 21. He then invaded America. From here, the author drags us through his version of the American dream: the endless weight training, real estate deals, political suckups and bad movies; the Humvee and private jet; his affair with Amazon man-hunter Brigitte Nielsen and rivalry with Sly Stallone; his love for Richard Nixon, his penchant for saying “outrageous” (read: stupid) things and his pathological zeal for self-promotion, and much more. Schwarzenegger documents his one-man Hollywood takeover in a blur of name-dropping and efficiently adds up the profits from each of his movies. By 2010, in addition to being a washed-up actor, the author was also the dubious mastermind behind the flashy culinary failure of Planet Hollywood and a lame-duck conservative ex-governor with record-low approval ratings. But just when it seemed like he was out of the spotlight, Schwarzenegger stirred up some saucy domestic drama, admitting to his wife that he impregnated the family housekeeper in 1996. Yet the iron-willed author admits to few imperfections and apologizes for little.

A vapid, hulking doorstopper of a self-tribute.