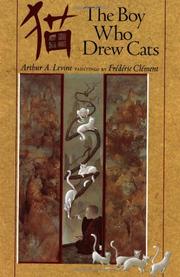 THE BOY WHO DREW CATS

adapted by Arthur A. Levine & illustrated by Frederic Clement

A competent adaptation of a legend about a frail boy whose farm family takes him to a monastery to train as a priest. Turned out because he neglects his work to draw cats, Kenji is ashamed to go home; instead, he goes to another village, where a fearsome Goblin Rat infests the temple where he seeks refuge. There his artistic ability serves well: while he sleeps, his wonderfully lifelike cats kill the goblin. ClÇment's acrylic paintings, in a spare palette of grays and browns touched with rust or garnet, are austere yet quietly dramatic. Unusual perspectives, strong composition in the picture plane, split-screen artwork, and boldly drawn Japanese characters incorporating illustrative vignettes—all contribute to an unusually well designed format. Citing Lafcadio Hearn's English paraphrase (1898), Levine offers an embellished retelling, naming characters, describing scenes in more detail, changing the point at which Kenji first experiences fear and some details of the conclusion. It's not an improvement on Hearn's graceful simplicity, but it's a likable update, striking a good balance between contemporary warmth and accessibility and respect for the earlier version. (Folklore/Picture book. 5+)