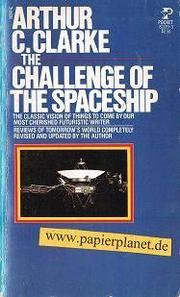 THE CHALLENGE OF THE SPACESHIP

Twenty articles concerning the impact of the coming space age on mankind written by the former chairman of the British Interplanetary Society and one of the most imaginative, scientifically oriented writers of space literature today. Writing with a truly universal perspective spiced with wry humor, the author gives informed speculations and reports on life on other planets, the similarities of skin-diving to space travel, human powered flight, a Martian's description of Earth, scientific evidence for the Star of Bethlehem, vacationing on Mars and the Moon, the "storing" of human beings for future duplication, the nature of flying saucers, moon geography, radio stars and the possibility of human evolutions among other subjects. All of this is in a wonderful mixture of easily assimilated astronautics, physics, astronomy, meteorology and magnetohydrodynamics. Most of these articles have appeared in Holiday, Horizon and Harpers, and gathering them in book form can only be a boon to anyone with the slightest interest in future space travel. Commenting that the shadow of coming space events is nearer to us now than the battle of Gettysburg, Mr. Clarke offers the layman a challenging conception of yet another potential of the roaring atomic age. This has broader appeal than his other books which are already standbys in bookstores and libraries.