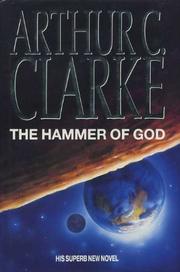 THE HAMMER OF GOD

Expansion of a short story (published in a fall 1992 issue of Time magazine) about the possibility of an asteroid colliding with Earth. In 2109, a newly discovered asteroid, Kali, is found to be on a collision course with Earth. Thanks to NASA, however, a SPACEGUARD defense system already exists. A powerful spaceship, Goliath, will rendezvous with Kali, land, then fire its rocket motors to nudge the asteroid aside. But then things start to go wrong for Captain Singh and his crew. Due to sabotage by religious fanatics who believe that God wants the Earth destroyed, one of Goliath's huge external fuel tanks ruptures and much propellant is lost. As Kali approaches the sun, it starts to warm up, and jets of gas and dust partially negate the effects of Goliath's nudge. The surface beneath the ship collapses, damaging another fuel tank and rendering it unable to take off from Kali. This wouldn't matter, except that Kali is still on collision course—so Earth votes to blast it aside with a nuclear explosion; Singh and his colleagues accept their impending deaths with fortitude and equanimity. The nuclear missile, hastily assembled by a disarmed US, smacks into Kali right on schedule—but fails to explode. Kali, though, breaks into two chunks, both of which narrowly miss the Earth. Stretched mighty thin—despite padding with docudrama snippets—but agreeably handled and sturdily credible.