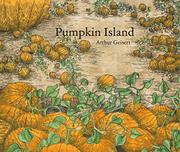 Geisert, known for his intricate etchings that often feature profusions of pigs, here turns to pumpkins, offering a meditation on the effects of one astonishingly fertile runaway pumpkin on a small Iowa town.

It all begins when a pumpkin is washed away from a farm to a small island in the middle of a river near a bridge. It breaks; its seeds sprout; vines soon stretch from the island to downtown via that bridge. In a sequence of expansive double-page spreads, Geisert depicts the overrunning of Main Street by the pumpkin’s progeny, the orange gourds improbably popping up everywhere. “People did fun things with the pumpkins. Sometimes, even dangerous things.” People throw pumpkins, do acrobatics and dance with them. And of course they build medieval siege weapons. Ultimately, after a gentle pumpkin chaos reigns for several page turns, the townspeople (all seemingly white) carve them into jack-o-lanterns and range them all up and down Main Street, their faces glowing long into the night. Geisert’s spreads offer readers detail upon whimsical detail, including a witch who walks calmly about and much rooftop tomfoolery. The text and art are occasionally out of sync, and, truthfully, there isn’t much plot—but there are many pumpkins to count.