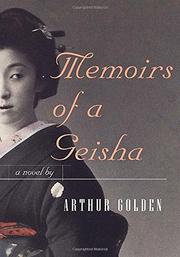 MEMOIRS OF A GEISHA

Cherry blossomdelicate, with images as carefully sculpted as bonsai, this tale of the life of a renowned geisha, one of the last flowers of a kind all but eliminated by WW II, marks an auspicious, unusual debut. Japan is already changing, becoming industrialized and imperialistic, when in 1929 young Chiyo's fisherman father sells her to a house in Kyoto's famous Gion district. The girl's gray- eyed beauty is startling even in childhood, so much so that her training is impeded by the jealousy of her house's primary geisha, the popular, petty Hatsumomo. Caught trying to run away, Chiyo loses her trainee status until taken under the wing of Mameha, a bitter rival of Hatsumomo. Chiyo flourishes with Mameha as her guide, soon receiving her geisha name, Sayuri, and having her mentor skillfully arrange the two main events vital to a geisha's success: the sale of Sayuri's virginity (for a record price), and the finding of a sugar-daddy to pay her way. Seeing the implications of Japan's militarism, Mameha pairs Sayuri with the general in charge of army provisions, so that as WW II drags on she and her house have things no one else in Gion can obtain. After the war, with her general dead and others vying for her attention, Sayuri pines anew for the only man she ever loved—an electrical- corporation chairman whose kindness to a crying Chiyo years before altered the course of her future. He seems out of reach since his right-hand man and closest friend is her most ardent admirer, but in the end her long-thwarted happiness is accomplished. Though incomparable in its view of a geisha's life behind the scenes, the story loses immediacy as it goes along. When modern times eclipse Gion's sheltered world, the latter part of Sayuri's life—compared to the incandescent clarity of its first decades- -seems increasingly flat. (First printing of 75,000)