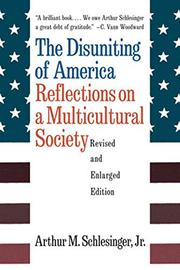 THE DISUNITING OF AMERICA

Reflections On A Multicultural Society (revised And Enlarged Edition)

A passionate criticism of multiculturalism by the two-time Pulitzer-winner. Schlesinger, a lifelong advocate of human rights, believes that this "eruption of ethnicity" has had many good consequences, that the belated recognition of the pluralistic character of American society has had a bracing impact on the teaching and writing of history, and that nothing is more natural than for black Americans to assert pride and claim identity. But cultural pluralism is not the issue, he says—"the issue is the teaching of bad history under whatever ethnic banner." When Oregon students learn that Africans visited the Americas before Columbus, or that Pythagoras and Aristotle stole their mathematics and philosophy from black scholars in Egypt, it is not only wrong, the author says, but it is the use of history as therapy. When black educators argue that black minds work in genetically distinctive ways, it is "just another word for racism." The Ku Klux Klan, says Schlesinger, could not devise a curriculum more effective in handicapping and disabling black Americans. Moreover, the author sees the multiculturalism movement as attacking the very fundamentals of American democracy, finding that its underlying philosophy is that "America is not a nation of individuals at all but a nation of groups, that ethnicity is the defining experience for most Americans." Schlesinger is blunt in his rebuttal: "It may be too bad that dead white European males have played so large a role in shaping our culture. But that is the way it is." A refreshing, outspoken treatment of a phenomenon too often clothed in euphemism.