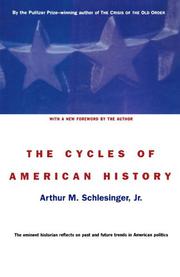 THE CYCLES OF AMERICAN HISTORY

Schlesinger's first book since his National Book Award-winning Robert Kennedy and His Times, this one exploring the grand themes which he sees weaving their way through American History. The two-time Pulitzer Prize-winner sees themes in contention over the meaning of America. The first, which he calls "the tradition," sprang from Christianity "as mediated by Augustine and Calvin." This strand made of the American experience an "implacable process of testing." As Schlesinger puts it. "Antiquity haunted the federal imagination." The second strand, termed "the counter tradition," also had roots in Calvinism and was represented in an emergent spirit of national destiny. Ever since our earliest history, Schlesinger suggests, our society has pitted realism against messianism, experiment against destiny. Pragmatically, this contention has resulted in alternating periods of reform and retrenchment. Schlesinger, mirroring the writings of economist Albert Hirschman, refers to these as periods of private interest and public purpose. Up to this point, Schlesinger's book appears to be Olympian in its objectivity. He is speaking as the aging historian emeritus who has earned the right to philosophize. However, suddenly the rest of the book degenerates into a slapdash (the book is actually a collection of updated, previously published essays) compendium of political writings aimed at demonstrating, for the most part, his own suspicion of the private-interest periods and his attraction to public purpose governments. He attempts, somewhat weakly, to demolish the idea that America's economic development was a direct result of the spirit of laissez-faire. The Founding Fathers, he states, were basically mercantilists who recognized the need for strong state action; Adam Smith, far from reflecting their ideals, actually wrote The Wealth of Nations to refute them. Undeniably a worthy and important work, if one keeps a wary eye out for the political bias.