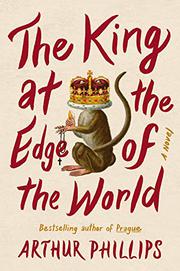 THE KING AT THE EDGE OF THE WORLD

The first novel in nine years from Phillips (The Tragedy of Arthur, 2011, etc.) is another bravura performance: a tale of espionage and theological intrigue set in Elizabethan England.

The book begins with a Turkish expedition in 1591 to England, "a far-off, sunless, primitive, sodden, heathen kingdom at the far cliffside edge of the civilized earth." One of the delegation's reluctant conscripts is Mahmoud Ezzedine, the sultan's personal physician, who leaves behind a comfortable life and a beloved wife and son. But at sojourn's end, Ezzedine—who's become friendly with a British physician/naturalist and familiar with British irony and raillery—makes a remark that, overheard, allows a conniving rival to trap him; if reported to the sultan, the jest would result in the doctor's execution. So Ezzedine is left in England as a "gift" to Elizabeth's court, and when he saves a nobleman who suffers a public seizure, he is passed along—regifted—to the epileptic. Ten years pass; Ezzedine, now "Matthew Thatcher," has adapted to his fate by converting to Christianity and by expunging—to the greatest extent possible—all memory of his homeland and former happiness. Meanwhile, Queen Elizabeth is dying, heirless, and the leading candidate for the throne is King James VI of Scotland. But James' bona fides as a Protestant—his parents were Catholic, as is his wife, and rumors abound of his secret papism—are in doubt, which could reignite the long sectarian bloodbath recently ended. Who better to peel the theological onion that is James, thinks the cunning spymaster Geoffrey Belloc, than the only Muslim in the empire? And so Ezzedine/Thatcher is regifted again, this time to the Scottish king. Phillips' incorporation of history—including an entertaining side plot about Elizabethan theater—shows the sure hand and psychological acuity he is known for. One is reminded of Hilary Mantel's magisterial Wolf Hall but perhaps more pointedly of Graham Greene's novels, which also often center on theology and spycraft and often feature a protagonist exiled, like Ezzedine, to some seedy outpost of foreignness and amorality.

A rare combination of literary finesse and quick-paced plot—and another triumph from the versatile Phillips.

THE TRAGEDY OF ARTHUR
by Arthur Phillips
Fiction

THE SONG IS YOU
by Arthur Phillips
Fiction

THE EGYPTOLOGIST
by Arthur Phillips
Fiction