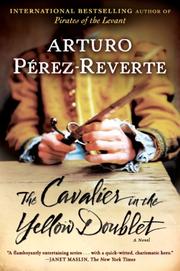 THE CAVALIER IN THE YELLOW DOUBLET

by Arturo Pérez-Reverte and translated by Margaret Jull Costa

Pérez-Reverte (The King’s Gold, 2008, etc.) returns to familiar territory in 17th-century Spain, dispatching Captain Diego Alatriste for a fifth round of swordplay, gamesmanship and swashbuckling romance.

Introduced in Captain Alatriste (2005), our hero is battle-hardened but tender-hearted, skilled with swords both literal and (ahem) metaphorical. In fact, his tenderness for women, in this case for the beautiful actress María de Castro, tends naturally to lead to complications with their husbands. Alatriste is accompanied by a young servant, Íñigo Balboa Aguirre, whose innocence leads him to folly and to some questionable decisions that endanger his master. Íñigo’s narration (though the author also uses an omniscient third-person voice) unfolds from the perspective of an old man who knows how the story is going to end; he gives us occasional flash-forwards to the fate of some of the characters, including the death of Alatriste, as well as to the decline of Spanish culture later in the century. The novel is set during the reign of Philip IV, and political intrigue both foreign and domestic stirs men to occasional acts of violence and attempts at assassination. It’s also a golden age of Spanish literature, and writers such as Lope de Vega and Tirso de Molina play roles on the periphery of the action. The lubricious villains try to implicate Alatriste in nefarious plots against the king, but our intrepid gallant of course manages to escape every shackle imposed on him. Although Íñigo’s fascination with one of the ladies of the court almost gets both master and servant killed, this is a world in which the good guys ultimately, and predictably, triumph.