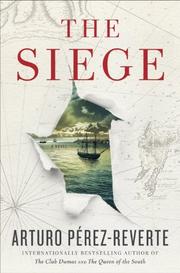 It's 1811, and as Napoleon’s army relentlessly shells the port of Cádiz, Spain, the city finds itself the target of a much more sinister presence. A shadowy figure is brutally murdering young women, and as amoral policeman Rogelio Tizón stalks this prey, he begins to realize that the murders and the French bombs are somehow intertwined. At the same time, the handsome Lolita Palma, upstanding owner of a shipping company, agrees to do business with corsair Pépé Lobo and soon finds herself drawn to his rough charms. And a mysterious taxidermist sends a secret carrier pigeon to a French captain, adding one more pin to his map of bombs. As Napoleon’s war rages on, the world finds itself in a vortex of change, with science competing against faith and tradition to help create a new world order. Pérez-Reverte begins with several different strands of story and weaves them into a rather impressive web. The level of detail is meticulous but also beautiful; his descriptions of the town and people of Cádiz capture colors, smells and personalities, making the page come to life, and he balances these sensory passages with dense observations about history, metaphysics, science and human nature. Whether the brutality of the murderer, and in fact of the war, is a result of “the imagination [running] out of control” or “atmospheric conditions” doesn’t ultimately matter to the story. Pérez-Reverte presents a chessboard on which the epic battle of science and fate becomes the story. In the end, it’s about “the dark chasms of the human mind,” a timeless theme if ever there was one.

A genre-bending literary thriller worth the time.