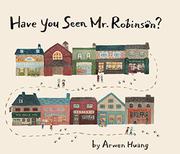 HAVE YOU SEEN MR. ROBINSON?

A solitary bookworm makes a friend.

Anna’s a reader. She “doesn’t have any ‘real’ friends,” the book explains alongside art that depicts her standing in line at the bus stop, nose in a book, and then by herself, still reading, at a classroom table as her classmates play all around her. “But she doesn’t mind, because she has many friends in her books,” it goes on, depicting her sitting on a unicorn and surrounded by characters both familiar (Little Red Riding Hood, a lute-bearing nymph, some animals) and less so. Among the latter are William Shakespeare, whom adults may recognize but children are unlikely to; a robed white man who leans on a globe (René Descartes??); and a gray-haired, Asian-presenting cellist who is probably not Yo-Yo Ma. Children must shake off this obscurity to proceed. Anna’s librarian grandfather sends her into the park to play. This does not go well until a boy named Jeff approaches her with the titular question. Mr. Robinson is his lost cat. “He’s big, fluffy, and cute.” The two kids proceed through town, climbing a tower from which Anna spots the cat, who “is not as cute as Anna had imagined.” And that’s pretty much it. Exactly what Huang is getting at in this story is unclear beyond a general feeling that it’s good for children to vary reading with interaction with other kids. Both Anna and Jeff present white.