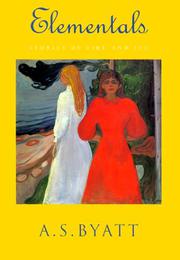 Stories of Fire and Ice

Six rather arbitrarily linked stories (which allegedly explore various “extremes and polarities”) from the rococo stylist whose best fiction includes Booker Prize—winning Possession (1990) and the (rather similar) story collection The Djinn in the Nightingale’s Eye (1997). Exotic locales and almost oppressively lush imagery dominate even such slight fictions as “Baglady” (set in a vast shopping mall in the “Far East” and redolent, if not reeking, of Muriel Spark); “Jael” (which employs the biblical Apocryphal story of Jael and Sisera to explain a moody commercial artist’s tendency “to rejoice in wickedness”; and “Christ in the House of Martha and Mary,” a witty parable in which an insubordinate cook is taught by a young artist to cherish even the evanescent glories of her own “Creation.” More interesting, and more precisely built on defining contrasts, are the longer stories: “A Lamia in the Cevennes,” about an Englishman’s retirement to the French countryside to paint—and to find, in his custom-built outdoor swimming pool, aesthetic and other temptations; and (the unfortunately titled) “Crocodile Tears,” about a suddenly widowed Englishwoman who escapes to the southern French city of Nimes (drenched in artifact-reminders of its past as a Roman outpost), and a transformative acquaintance with a Norwegian tourist whose burden of loss both reflects and mocks her own: it’s a dizzily amusing, oddly seductive tale of cultural and psychological conflict. The best piece is “Cold,” a deliciously imagined fairytale whose heroine, the beautiful princess Fiammarosa, unexpectedly departs the invigorating northern clime where she thrives to marry a prince (and expert glassblower) from a barren desert country. Her life is soon indeed imperilled, but the prince’s creation of an “artificial world” magically preserves her—and their union. This is a brilliant and charming variation on its announced theme, namely that “Love changes people.” An often enchanting further display of Byatt’s fluent style and far-reaching imagination.