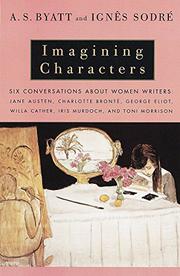 Two discriminating readers invite us to listen in on seven conversations about six important novels by women. Bestselling novelist Byatt and psychoanalyst Sodre cultivate the art of literary conversation. The underlying premise is that literature in general, and the novel in particular, is a unique and important form of knowledge that calls upon its readers to carry on its imaginary world in conversation and discussion. Both Sodre and Byatt are shrewd readers, as well as voluble conversationalists. However, in print the effects are mixed. Their conversations are shapeless, as conversation often is, and the reader only gradually begins to see the emphasis fall on certain themes and ideas that appeal to their imaginations: fear of marriage, the problem of womanly self-determination, the presence of myth and fairy tale, moral consciousness in fiction. These themes float by in the wash of words without ever taking a clear shape. And too often the language, as in real conversation, is woolly and inexact. But perhaps the most limiting circumstance of this book is the admirably sympathetic relationship between Byatt and Sodre. They are so like-minded that what we have is not a dialogue but instead a monologue in two-part harmony. They don't force each other to clarify, defend, and produce persuasive evidence for their views. These objections notwithstanding, there remains enough stimulating observation and thought to hold the attention of those interested in the authors' favorite books (Mansfield Park, Villette, Daniel Deronda, The Professor's House, An Unofficial Rose, and Beloved) or in the novel as a way of knowing the world. Or in Byatt's view—which is aligned with that of Iris Murdoch—``all art but the very greatest is consolation and fantasy, but really great art is a form of knowledge.'' Byatt and Sodre attempt to bring out the knowledge that resides in art alone.