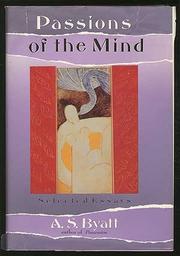 PASSIONS OF THE MIND

A collection of previously published essays and reviews (The Guardian, Times Literary Supplement, etc.), seemingly more the work of a competent grad student than an imaginative novelist, and sure to disappoint those who enjoyed Byatt's Booker Prize-winning Possession (1990). In essays about her favorite Victorians (Robert Browning and George Eliot) and moderns such as Ford Madox Ford and William Golding, Byatt, a former lecturer in English and American Literature at the Univ. of London, explores the relations between narrative and religion. These writers, Byatt suggests, vindicate the ``fictive form'' as the appropriate place to resolve the problem ``of the real'' in a postreligious world. For Byatt, Browning is ``a poet who writes of men and women, all separately incarnate, all separately aware of their necessarily and splendidly limited ways of infinite passion and the pain of finite hearts that yearn.'' Eliot's intelligence, she concludes, ``combined thought and feeling in a new form of poetic but ironic realist fiction.'' In perhaps the most accessible and persuasive essay here (``Accurate Letters: Ford Madox Ford''), Byatt describes Ford as a writer who taught us the distinction between the ``great lie'' and ``the hard ideas of truth.'' And a number of her reviews on writers as varied as Toni Morrison, whom she admires, and Barbara Pym, whom she does not (``[Pym] appears gentler than Spark or Weldon but is also infinitely less generous, humane and imaginative'') are intelligent, perceptive, and refreshingly opinionated. Most often confined by narrow academic parameters to lengthy quotes and tentatively advanced ideas, Byatt's rich inventive talents are well served here only rarely.