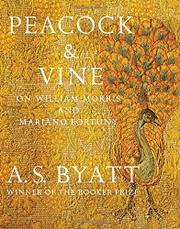 On William Morris and Mariano Fortuny

An impassioned dual appreciation of two 19th-century creators who turned their lives into art.

In this amply illustrated extended essay, novelist Byatt (Ragnarok: The End of the Gods, 2012, etc.) juxtaposes two artists, one well-known and one less so. Besides being virtually synonymous with his style of design, William Morris (1834-1896) is known for his own writings and his association with the Pre-Raphaelite Brotherhood. Mariano Fortuny (1871-1949) was an Italian fashion designer whose brilliant dresses and gowns earned him a lasting name in high art circles. In Remembrance of Things Past, Proust dressed his character Albertine in a Fortuny gown; Isadora Duncan and Eleanora Duse danced in them, and, decades later, Susan Sontag chose to be buried in one. Although the two men were born generations and worlds apart and did not intersect, for Byatt, both embody the idea of constant creativity and workmanship. They were artists and artisans; the world was their studio; and neither was ever restricted to a single means of expression. Morris was almost as famous for his homes—the Red House and Kelmscott Manor—and gardens as for his books and designs. He was also skilled at calligraphy, dyeing, painting, paper-making, tapestry, and engraving. Fortuny was a photographer and maker of lamps and a lighting artist for the stage, and he designed his own reading desk and took out more than 50 patents. Morris was a devotee of nature while Fortuny was devoted to the female form, but both had rigorous and highly ordered imaginations. They challenge Byatt to look deeper and express more. “Reading Fortuny and Morris together,” she writes, “made me think very hard, and with great pleasure, about the need to make representations of the outside world, and about the need to hand these on and change them.”

Although brief, this is an inspiring homage that forges illuminating connections between two dynamos.