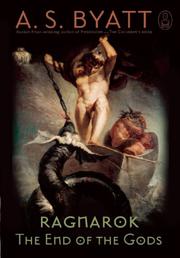 The End of the Gods

A multilayered retelling of the end of the world from Norse mythology, framed by the award-winning British novelist’s analysis of how myth relates to her own work.

This slim volume doesn’t invite comparison with the expansive novels of Byatt (Possession, 1991, etc.). As she explains, “Gods, demons and other actors in myths do not have personalities or characters in the way people in novels do. They do not have psychology.” Yet her narrative strategy recasts the myth through the perception of a reader known only as the “thin child in wartime,” a British girl whose name and age are unknown, who finds resonance in this war of the Gods with the war from which she doesn’t expect her father to return. Byatt invites some identification of this girl with the author by dedicating this book to her own mother, “Who gave me Asgard and the Gods,” a primary source for this retelling. The girl compares the myth of world’s end with the Christian faith into which she was born, and to Pilgrim’s Progress, which she has also been reading. “Bunyan’s tale had a clear message and meaning. Not so, Asgard and the Gods. That book was an account of a mystery, of how a world came together, was filled with magical and powerful beings, and then came to an end. A real End. The end.” The girl doesn’t come to believe in the Norse gods, a worshipper of Odin and Thor, but the reading experience leads the author to the conclusion that “the Christian story was another myth, the same kind of story about the nature of things, but less interesting and exciting.” While the narrative illuminates the essence and meaning of myth, particularly as it shapes a young girl’s wartime experience, it also serves as an environmentalist parable, one where we are “bringing about the end of the world we were born into.”

Though the cadences are like those of a fairy tale, a narrative seen through the eyes of a child, the chilling conclusion is not.