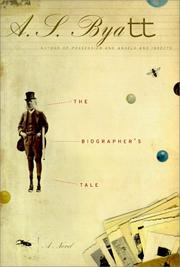 An academic who forsakes the realm of concepts and theories for the quotidian world of “things” is the unlikely—and quite likable—protagonist of Byatt’s formidably learned latest, which echoes rather loudly her Booker Prize–winning Possession (1999).

When Phineas G. Nanson, whose notebooks we are reading, grows tired of postgraduate arcana and decides “to stop being a post-structuralist literary critic,” a mentor’s suggestion leads to his absorption with the late biographer Scholes Destry-Scholes, whose magnum opus was his acclaimed three-volume study of Victorian writer-adventurer Sir Elmer Bole—imagined as an amalgam of Richard Burton, T.E. Lawrence, and perhaps Thomas Babington Macaulay (with just a dollop of Arthur Conan Doyle added). Phineas’s hopes of writing a biography of the biographer are complicated by his serendipitous discovery of three “documents” that were presumably ur-materials for an unwritten triple biography—of, as clues about its subjects gradually clarify, Carl Linnaeus, Henrik Ibsen, and anthropologist-eugenicist Sir Francis Galton. Nor is rummaging about in libraries all. The ever-susceptible Phineas becomes involved with two unusual and irresistible women: Destry-Scholes’s scholarly niece Vera Alphage, who works in a hospital and privately collects X-rays; and “bee taxonomist” (and “eco-warrior”) Fulla Biefield, with whom Phineas soon finds himself plunging through forests in search and defense of the endangered stag beetle. Though this and other similarly loopy sequences are great fun to read, Byatt offers relatively little story, and a top-heavy load of arch speculation about the conflict between Art (Vera) and Life (Fulla), the likelihood that biographers (especially the resourceful Destry-Scholes) invent as much as they record, and the caveat that the “search for authenticity in scholarship can have its dangers.” It’s dry, all right, but admirers of Possession (and a somewhat similar novel, Angus Wilson’s Anglo-Saxon Attitudes) probably won’t mind.

Not for Oprah’s Book Club—but readers willing to be lectured will be suitably rewarded.