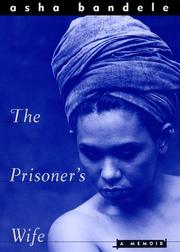 A haunting, intensely emotional memoir of the middle-class author’s relationship with a man jailed for murder. In lyrical, flowing prose, columnist and performance poet Bandele (Absence in the Palms of My Hands, not reviewed) presents piercing portraits of herself, the man she loves, and a prison system designed to stifle all sensibility. Growing up in a black, middle-class world of private schools, summer camps, dance lessons, horseback riding, art classes, and gymnastics, Bandele is groomed to believe that success and independence are her birthrights. At 21 she is married in an expensive, formal June wedding to a highly respected young man. Two years later her marriage unravels, and the writer finds herself ardently drawn to a convicted murderer she meets while giving a poetry reading at an upstate New York prison. While coming to terms with her role in this unorthodox relationship, which eventually leads to marriage, Bandele examines with painful honesty a past riddled with sexual abuse and several suicide attempts following prolonged depressive episodes. Rashid, the inmate, emerges as a spiritual, sensitive soul who is also the victim of childhood brutality. Bandele successfully conveys the callousness of the prison system, where inmates and their visitors are dehumanized through strip searches, scrutinizing glances, and insensitive comments. (Even a passionate conjugal visit is interrupted by a security count.) While much of the writing deals with feelings, the writer also dispassionately reports on the redemptive role that Islam plays in her husband’s life as a “code for living, a structure, a set of rituals, a chart directing him through every minute of every day.” To Bandele, by contrast, it is merely a set of stifling rules that smother her spirit. “I do not want to be in a religion where men cannot shake my hand or hug me unless we—re married,” she tells Rashid in one of their unresolvable debates. Mesmerizing and disconcerting, offering insights into why caged birds sing.