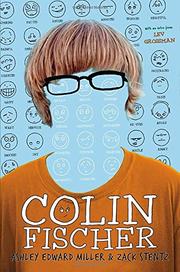 The subgenre combining sleuthing with characters who have Asperger syndrome gets a new entry offering humor and interesting historical and scientific connections—but the narrative viewpoint drifts unsettlingly.

Colin begins high school with a cheat sheet to decipher facial expressions, but he no longer uses a “shadow,” an adult to help him navigate the social landscape. The hallway’s crowded (Colin hates touch); the bathroom sign is blue (a color he dislikes); and Wayne (who’s been bullying him for years) dunks his head in the toilet. As the plot unfolds—bullying, Colin’s arithmetical approach to basketball, birthday cake and a real gun going off in the cafeteria—Colin tracks everything in his notebook (facts only). Many entries end with this plan: “Investigate.” As a sleuth, Colin’s sharply observant, his discoveries impressive. The gun mystery doesn’t frighten him: “Wayne Connelly is innocent, and I will prove it. The game is afoot.” Disconcertingly, the narrative voice conveys some of Colin’s thoughts but also some of his parents’ and Wayne’s; sometimes it aligns itself with Colin’s perspective, sometimes it describes him from the outside (“her irony as lost on Colin as it usually was”). Omniscience is one thing, authorial convenience another. This mobile narrative allegiance makes it hard to pinpoint whether the Asperger humor is from Colin or about him.

Entertaining, but confused about its point of view.