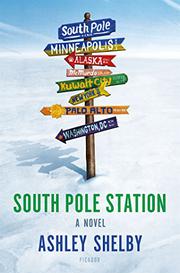 In the messy human petri dish at the South Pole, a comic novel brews.

Shelby begins her smart and inventive first novel with 11 italicized questions plucked from a psychiatric evaluation: "Are you often sad? Do you have digestion problems due to stress? Do you have problems with authority?..."Any American headed to Antarctica in 2003 via the National Science Foundation must answer them. It’s a nifty way to unpack character and signal why her heroine, Cooper Gosling, has passed only provisionally. Cooper is 30, a drinker and a fine arts painter from the upper Midwest, a smartass who holds that “hotdish had never received its gastronomic due and the fake Minnesota accents in Fargo were the blackface of regional phonology.” Fetching and witty, Cooper becomes the station chief’s favorite and irresistible to a tall and handsome astrophysicist. Their attraction—one of the novel’s key pleasures—is telegraphed within the first few pages. Readers also learn early that Cooper is fleeing the sorrow of her twin’s recent suicide; she carries a pinch of his ashes in a travel-size Tylenol bottle. Thus, Shelby balances Eros with Thanatos in a story composed of barbed dialogue, email, and official memos. A climate-change skeptic arrives to bedevil the polar community, hatching a far-fetched political conspiracy. Clearly, the writer likes agita—politics mixed with science fuels Red River Rising (2004), her nonfiction book about the catastrophic 1997 flood in Grand Forks, North Dakota. She writes well about science and the peculiar, pressurized human ecosystem at the bottom of the world. Bozer, a polar station construction chief, gets his own point-of-view chapter, and it lifts him from caricature to one of the best aspects of the book. Hovering over all is Cooper’s sort-of “spirit animal,” the British explorer Apsley Cherry-Garrard, who wrote the Antarctica classic The Worst Journey in the World. This new book would no doubt confound him but, in the end, bring him delight.

Jokes lubricate a moving and occasionally preposterous story of love and death in the Antarctic cold.