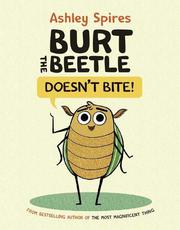 From the Burt the Beetle series

“I’m more of a hugger,” says the eponymous six-legged guide through the world of insect powers and superpowers.

Ants can carry 50 times their weight; hawk moths emit ultrasonic blasts to confuse predatory bats; nasute termites spray paralyzing venom; and stink bugs—well, “Super gross. But also super cool.” But June beetles…can’t do those things. Nor, as Burt the 10-lined June beetle unwillingly proves, can they run fast, fly very well, or even tap dance. They do have sticky legs, for what it’s worth—which is, it turns out, quite a lot when the only way to rescue friends from a spider’s web of “sticky bum strings” is to hug the spider and hold on. “What…is…happening?” gasps the arrested arachnid, all eight legs dangling limply as a beatific Burt clasps it tight—then: “Oh, crumbs.” Following a final group clinch, a closing gallery adds even more insect facts and friends. In the wake of Fairy Science (2019), Spires here flits to a different area of STEM for another playful but informative gander at the natural world that likewise artfully stirs a light load of fact into a mix of cartoon-style illustrations and banter. Along with effortlessly absorbing the former while enjoying the latter, readers may well find it easy to embrace the wonders that the insect world presents to anyone willing to take a closer look. (This book was reviewed digitally.)

Proof that courage and loyalty are superpowers too…even for species that can’t emit ultrasonic blasts.