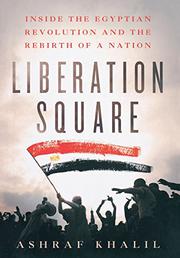 Inside the Egyptian Revolution and the Rebirth of a Nation

A debut journalistic memoir by Cairo-based reporter Khalil, who covered the rise and fall of Hosni Mubarak's dictatorship.

The author begins with the optimism that followed Mubarak's coming to power and presents a pattern of events that demonstrate how the corruption and intimidation practiced in a police state produced the demoralization and resignation that affected almost every Egyptian citizen. Khalil details how courageous individuals such as Saad Eddin Ibrahim—one of Egypt’s leading civil-rights advocates, whose prosecution helped spark a mass movement against Mubarak in 2003 and 2004—began to stand up against the regime. The poisonous combination of judicial corruption and police brutality began to awake significant opposition, and the tipping point was the brutal beating death of Khalid Saieed in Alexandria on June 6, 2010. After pictures of his brutalized body were disseminated online, many Egyptians understood the gravity of the situation—anyone could be killed in the same way. Khalil’s discussion of the role of the Internet and social media provides insight into how large numbers of people were organized to achieve specific objectives—for example, converging on Cairo's squares and other public areas. The author skillfully examines how the opposition to Egypt's paramilitary police gained strength, and how American diplomacy contributed to the cause. Khalil closes with the battle for Tahrir Square and the overthrow of the dictatorship. “Seeing Egyptians regain that sense of dignity, pride, and ownership,” he writes, “was one of the most amazing aspects of the entire pressurized three-week Egyptian revolution.”

A personal account that will be appreciated by those looking to move beyond the day's headlines, from one who wrote some of the stories published under those headlines.