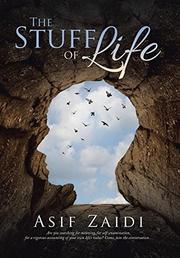 THE STUFF OF LIFE

An assemblage of meditative reflections on the meaning of a life well-lived.

Debut author Zaidi, in response to the persuasion of friends, has gathered a collection of short essays (and public addresses) created over the years; the underlying theme is the rational investigation of the meaning of life. That undergirding conceit is sometimes less apparent among the diverse subjects. For example, many of the essays read like paeans to worthy pursuits: Zaidi extols the elemental virtues of art and literature, meditation, reading, education in general, and a commitment to personal growth. There are also discussions on related miscellany, like the advantages and disadvantages of the internet, the problem of disinformation in the media, and the key to public-speaking success. Zaidi’s focus is philosophical; his essays explore the nature of consciousness, the limits of conceptual and dualistic thinking, and the distinction between forgiveness and love. The fulcrum of the work, however, is the relation between faith and reason or the elucidation of our place in the cosmos. The author carefully makes the case for an authentic religiousness—understood as the quest for personal meaning—that is also atheistic and consistent with the findings of modern science. In this way, he attempts to navigate between blind belief and the willful dogmatism of “irreligious extremists.” Zaidi is often exceedingly thoughtful, and his philosophical temperance is impressive. However, the writing can be flaccid and confusing, and it seems to strain too laboriously for profundity: “But regardless of the relative worth of different religious beliefs, the way we are correlated to the environment indubitably substantiates mankind’s emergence from the forms of life which precede us in evolution and which continue to be a part of our psychic nature.” What the book lacks in rigor and originality, it makes up with its intellectual evenhandedness—such ideology-free analysis is rare and welcome in these rancorously divisive times.

A flawed but refreshingly mature consideration of life, reason, and spirituality.