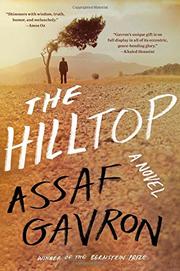 Gavron's sardonic yet sage story, which earned Israel's prestigious Bernstein Prize, focuses on an ever expanding community of observant Jews that populates the West Bank settlement Ma'aleh Hermesh C. Bit by bit—a new mobile home here, a spare room fashioned from a shipping container there, a new playground for the kids (funded by a deep-pocketed Miami macher), maybe some improvements for the synagogue or day care center (Jewish workmen only, please)—these settlers, who consider themselves modern-day pioneers, gradually establish ever more permanent footing as the government either looks the other way, threatens to evacuate, or (despite the fact that the settlement may not officially exist) boosts their infrastructure and provides protection, depending on the moods and whims of those in power on any given day. Through it all, Ma'aleh Hermesh C's motley assortment of residents contends with the stuff of life—babies are born, marriages break up, business ideas bloom and die, teenagers come of age and struggle to grasp where they stand. Within the vast cast of characters, two brothers, Roni and Gabi Kupper, orphaned as infants, raised on a kibbutz, are central. Gabi, the younger, has found his life derailed by uncontrollable rages—the result of "a short-circuit in the brain," perhaps. Newly religious, and fervently so, he has come to the hilltop to seek sanctuary, absolution and maybe even, eventually, a sense of belonging. But what, precisely, is his elder brother, Roni, a secular Jew who worked as a high-stakes trader at a Wall Street hedge fund, seeking? Gavron lets Gabi's and Roni's stories unfold gradually, and in the midst of this wise and waggish tale, we may find ourselves feeling unexpectedly invested in these disparate brothers' fates.

Slowly and incrementally, like those settlers on that craggy West Bank hilltop, Gavron's story gains a foothold in our hearts and minds and stubbornly refuses to leave.