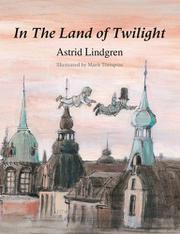 IN THE LAND OF TWILIGHT

The third book from this Swedish team relates a fanciful dream tale that sharply contrasts with their realistic previous two (A Calf for Christmas and Goran’s Great Escape, 2010, 2011).

Told in first person by a boy who’s been told he won’t walk again because of a bad leg, the tale recounts his visit to the Land of Twilight with Mr. Lilyvale, who comes through his window. They fly over the sights and scenes of Stockholm, from the spire of St. Clara’s Church to Kronoberg Park, where red and yellow candies grow on trees. The boy drives a tram off a bridge and into a river and then steers a bus to a countryside farm, where he meets a talking moose, dances and eats. Mr. Lilyvale even presents him at court to the King and Queen of the Land of Twilight. Throughout their travels, Mr. Lilyvale repeatedly says, “Nothing really matters in the Land of Twilight,” with the last sentence explicitly affirming the sentiment: “It really doesn’t matter if you have a bad leg, because in the Land of Twilight you can fly.” The message seems questionable here—that your imagination can take you anywhere? At times readers may find themselves wondering if it isn't an extended metaphor for death. The watercolor illustrations waft across the pages, incorporating twilight colors in a breezy style.

Though the format is attractive, its rambling airiness will disappoint Lindgren fans and have a limited audience.