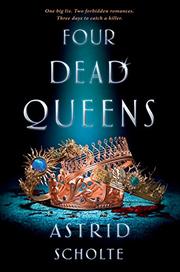 A thief is endangered by accidentally acquired regicidal evidence.

Keralie, a top thief working for her childhood friend Mackiel, steals a case of comm chips—technology that holds embedded memories and implants them in another person’s mind—from a messenger. When Varin, the messenger, who has a degenerative eye condition, coerces Keralie into helping him recover them, they run afoul of Mackiel and—as a power play—Keralie ingests the comm chips, receiving memories of Quadara’s queens being assassinated. In each of Quadara’s four quadrants, a queen lives and rules, following strict laws. Other than Keralie’s, the other viewpoints in the book are close third-person following the queens, revealing palace secrets and their grisly ends while they try to find the assassin, interspersed with Varin and Keralie’s efforts to stay alive while figuring out what to do with the information they have. This structure relies on timeline manipulation, which is deftly handled and results in exponential payoffs the deeper into the book the reader gets. The inventive worldbuilding, though occasionally superficial, features vastly different quadrant cultures (e.g., one high tech, one without electricity). The distinctive characters—strong queens and wonderfully flawed Keralie—are as appealing as the murder-mystery plot. Most characters are white like Keralie; Varin has dark hair and tan skin, and two of the queens are dark-skinned.

Scholte’s stand-alone debut marks her as an author to watch.