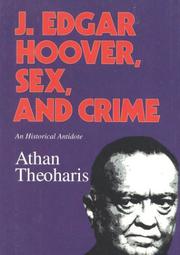 A trenchant deconstruction of much-ballyhooed revelations (in Official and Confidential: The Secret Life of J. Edgar Hoover, by Anthony Summers, 1993) that longtime FBI director J. Edgar Hoover was gay—plus an analysis of Hoover's policies toward sex and crime. Theoharis (History/Marquette Univ., The Boss: J. Edgar Hoover and the Great American Inquisition, not reviewed) scores Summers's ``mind-boggling,'' simplistic account of Hoover's ``compromised directorship,'' in which he allegedly suffered Mafia blackmail and pursued politicians' sexual peccadillos out of his own hypocrisy. If Summers is right, asks the author, why haven't former FBI agents or attorneys general come forward to corroborate such charges? Theoharis, who doubts that Hoover was gay, believes the ``wily and cautious'' bureaucrat would never have let himself be compromised; he also finds several weaknesses in the account of Summers's best source, Susan Rosenstiel (wife of a liquor magnate), who said she had seen Hoover in drag at gay orgies. Hoover, the author argues, exploited the ``moralistic concern about personal conduct'' that pervaded the country when he took office in the 1920s. He collected dirt on numerous politicians and public figures, gay and straight, but usually used such information cautiously, relying on Congress and the press rather than blackmail and direct publicity. Hoover seized on WW IIera concerns about fascism and communism to further build the FBI. This politically popular concentration on fighting subversives, Theoharis contends, damaged the FBI's capacity to fight organized crime: ``From 1936 Hoover for the most part abandoned law enforcement.'' Hoover survived, the author concludes, because his politics matched those of our political elite. Only after Hoover died in 1972 did the FBI turn to organized crime, needing to recapture public opinion after embarrassing revelations about its extralegal methods. Students of history and policy should pay heed.