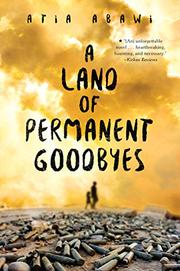 A LAND OF PERMANENT GOODBYES

From award-winning journalist Abawi (The Secret Sky, 2014) comes an unforgettable novel that brings readers face to face with the global refugee crisis.

Tareq, a young Syrian teenager, changes his daily routine as airstrikes on his city increase. When his home is hit by a bomb that kills most of his family in one day, Tareq is suddenly a refugee, traveling with his father and one surviving younger sister, Susan, to another Syrian town, then out of Syria to Turkey. When life in Turkey offers little hope, Tareq’s father sends him and Susan to make the treacherous trip to Greece by water. Through incredible dangers and suffering, they meet refugees and aid workers from across the globe. Abawi integrates just enough background information into the plot to make the story and characters comprehensible. The narrator is Destiny, whose authoritative voice suits the tragic and dramatic turns of plot. The narrator’s philosophical asides allow readers just enough distance to balance the intimacy of the suffering witnessed along the journey while helping to place the Syrian crisis in global and historical context as part of the cycle of humanity. The direct address challenges readers in a way that is heavy-handed only at the end, but even so it is chillingly effective.

A heartbreaking, haunting, and necessary story that offers hope while laying bare the bleakness of the world Tareq leaves and the new one he seeks to join