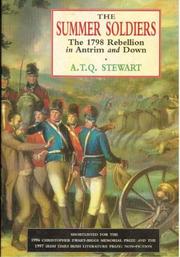 The 1798 Rebellion in Antrim and Down

An eloquent account of the savage British suppression of the 1798 rising of the Society of United Irishmen in Northern Ireland. Inspired by the American and French revolutions, the 1798 rising against British rule was brought about by a rare coalition of Irish Catholics and Protestants. As Stewart points out, the United Irishmen was originally a benign patriotic organization devoted to reform and repeal of barbarous British anti-Catholic laws. With the commencement of war with France in 1793, the author explains, British authorities suspected the United Irish movement of harboring pro-French elements, and suppressed it. The rebellion actually went through three disjointed phases in the spring and summer of 1798: the May outbreak of a spontaneous army, mostly of peasants, in the southeast; the August uprising in Mayo; and the short-lived uprising (June 613) in the northern counties, which is the principal subject of the author's narrative. Stewart recounts the doomed rebel effort, a tale of mostly small skirmishes and small maneuvers, from the ``turn-out'' of rebel forces, armed with pikes, along the coast until the climactic ``Battle of Antrim,'' actually a massacre of rebels of Ballynahinch and the main rebel position at Ednavady Hill. The poorly armed and disorganized rebels, led by charismatic leaders like Wolfe Tone and Henry Joy McCracken, were finally suppressed by British forces under Major- General George Nugent. While the rebellion's surviving leaders were brutally executed, the memory of the rebellion, and its brief union of Catholics and Protestants, lived on to inspire the Irish patriots of the future. Vividly drawing on primary sources such as letters and diaries, the author makes the tragic rebellion come alive, absorbing the reader in a compelling story of heroism and tragedy. (History Book Club selection)