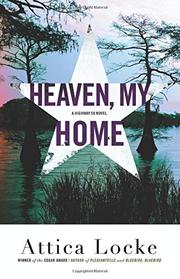 The redoubtable Locke follows up her Edgar-winning Bluebird, Bluebird (2017) with an even knottier tale of racism and deceit set in the same scruffy East Texas boondocks.

It’s the 2016 holiday season, and African American Texas Ranger Darren Matthews has plenty of reasons for disquiet besides the recent election results. Chiefly there’s the ongoing fallout from Darren’s double murder investigation involving the Aryan Brotherhood of Texas. He and his wife are in counseling. He’s become a “desk jockey” in the Rangers’ Houston office while fending off suspicions from a district attorney who thinks Darren hasn’t been totally upfront with him about a Brotherhood member’s death. (He hasn’t.) And his not-so-loving mother is holding on to evidence that could either save or crucify him with the district attorney. So maybe it’s kind of a relief for Darren to head for the once-thriving coastal town of Jefferson, where the 9-year-old son of another Brotherhood member serving hard time for murdering a black man has gone missing while motorboating on a nearby lake. Then again, there isn’t that much relief given the presence of short-fused white supremacists living not far from descendants of the town’s original black and Native American settlers—one of whom, an elderly black man, is a suspect in the possible murder of the still-missing boy. Meanwhile, Darren’s cultivating his own suspicions of chicanery involving the boy’s wealthy and imperious grandmother, whose own family history is entwined with the town’s antebellum past and who isn’t so fazed with her grandson’s disappearance that she can’t have a lavish dinner party at her mansion. In addition to her gifts for tight pacing and intense lyricism, Locke shows with this installment of her Highway 59 series a facility for unraveling the tangled strands of the Southwest’s cultural legacy and weaving them back together with the volatile racial politics and traumatic economic stresses of the present day. With her confident narrative hands on the wheel, this novel manages to evoke a portrait of Trump-era America—which, as someone observes of a pivotal character in the story, resembles “a toy ball tottering on a wire fence” that “could fall either way.”

Locke’s advancement here is so bracing that you can’t wait to discover what happens next along her East Texas highway.