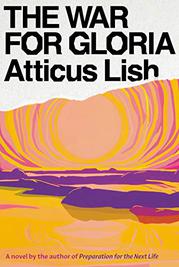 THE WAR FOR GLORIA

A teenage boy in suburban Boston faces his mother's illness and his father's darkness.

Lish, winner of the PEN/Faulkner Award for his first novel, Preparation for the Next Life (2014), returns with a moody, atmospheric tragedy set in working-class Massachusetts. Gloria Goltz, a "thin, blonde-headed Janis Joplin" with feminist intellectual leanings and literary aspirations, dropped out of Lesley College in Cambridge when she fell under the spell and ultimately bore the son of MIT security guard and self-anointed supergenius Leonard Agoglia, whom she and her friends compare to Good Will Hunting. Though her attachment to Leonard never flagged, even during the many years they barely saw each other, his influence on her life was bleak. "She lost school, love, family, pride…her apartment....The portrait of depression dated from this time." As the book opens, their son, Corey, is 16. His mother, who has been raising him alone all this time, is about to get a diagnosis of ALS, engendering the return of his father to their lives. If that sounds like a nice thing, it definitely isn't—Leonard now definitively reveals himself to be Bad Will Hunting, if any kind of Will Hunting at all. This novel has two sides to its personality—on one side, it's a painfully yet beautifully detailed history of Corey and Gloria and their journey through her illness. (The author's mother was diagnosed with ALS when he was 15, and it seems unlikely that anyone with less immediate experience could have written this book. If you haven't had personal exposure to the disease, you'll learn why it's one of the cruelest ways to die.) On the other hand, in the third act, the novel becomes a Dennis Lehane–ish thriller, with brutal tabloid events piling up almost cartoonishly—but some readers will be too emotionally involved for cartoons at this point. Even those who find themselves rebelling against this aspect of the book will venerate Lish for pushing his vision to the limit and for producing sentences that seem to have been forged in some kind of roaring foundry.