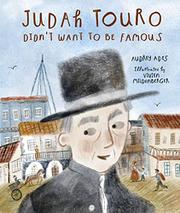 The successful business life and subsequent philanthropy of one of early America’s wealthiest and most pious Jews are recounted in a picture-book biography.

Raised by his uncle, Isaac Hays, a founder of Boston’s first bank, Judah learned much about shipping, real estate, and trade before setting off on his own at the dawn of the 19th century. A quiet, private man, Judah made his fortune in New Orleans trading New England products. After being wounded during the War of 1812, Judah began to concentrate on putting his wealth toward charitable causes. Simply drawn illustrations in muted brown, gray, and blue hues have both a childlike feel and the look of crayons or colored pencil in combination with watercolor; this results in a humble view not often seen in representations of New Orleans and appropriately reflects the story’s themes. The easy-flowing narrative tells how this son of a rabbi in a Sephardic immigrant family adhered to the Jewish tradition of giving inconspicuously, to causes both local and all over the world, hoping to avoid recognition for his good deeds. Some of these were paying for the freedom of enslaved African Americans, a few of whom are included in one illustration alongside the pale-skinned Judah. The author’s notes provide some added information about the benefactor’s family and his legacy.

A candid introduction to a little-known figure in Jewish American history.