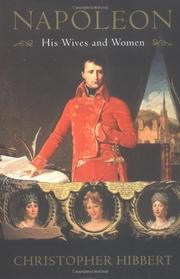 The Little Corporal goes love-happy and receives little but scorn for his troubles.

Napoleon had plenty of excuses for not having been a dynamo in the boudoir: after all, he had a world to conquer, and affairs of state took precedence over affairs of the heart. Even so, he found plenty of time to chase women, some of whom left distinctly unflattering accounts of his performance and endowments—accounts that have found their way into the Napoleonic folklore and given rise to some scurrilous slanders and deliciously unprintable limericks. Hibbert, distinguished biographer of Europe’s royals and nobles (Wellington: A Personal History, 1997, etc.), writes sympathetically of his subject while acknowledging the justice of some of those complaints. He writes that even Napoleon himself remarked, “I don’t like women very much. . . . I take them and forget them,” and, as one of his contemporaries reported, “He seldom said anything agreeable to women . . . and frequently made the rudest and most extraordinary remarks. To one he would say, ‘Good heavens, how red your arms are,’ or to another, ‘What an ugly hat!’ Or he might say, ‘Your dress is rather dirty. Don’t you ever change your clothes?’ ” Yet women, Hibbert writes, played an important role in Napoleon’s life, from his mother, who did much to form his imperious and quick-tempered character, to his “little Creole” Josephine, whom he divorced because she could not bear him an heir but whom he loved as no other, from the prostitute who initiated him as a young officer to the wives of the English and French officers who kept an eye on him while imprisoned on St. Helena. Napoleon emerges in Hibbert’s account as a tightly wrapped bundle of neuroses, capable of a strange tenderness and of outrageously bad manners—all of which allows us to see Napoleon as a flawed and wounded human, an aspect little encountered elsewhere.

For students of military history and tactics, this is a modest addition to the huge library devoted to Napoleon. But for general readers, it’s a pleasure, full of well-chosen information and juicy anecdotes.

THE BORGIAS AND THEIR ENEMIES
by Christopher Hibbert
Nonfiction

THE VIRGIN QUEEN
by Christopher Hibbert