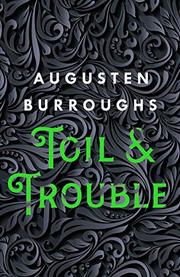 The magical side of the acclaimed author’s colorful life.

Burroughs (Lust & Wonder, 2016, etc.) is well known for his soul-baring, bestselling memoirs, including Running With Scissors, his vivid portrait of his dysfunctional family life, and Dry, his powerful account of alcoholism and getting clean. One might think he has few secrets left to divulge, yet in this latest memoir, he reveals a startling new detail: He’s a witch. In fact, the author, who first realized his “gift” as a young boy, comes from a long line of witches, including his mother and grandmother. The loosely constructed narrative initially revolves around the author’s anecdotal “witchy” incidents that occurred as a child and then later as an adult, especially as related to his relationship with his husband, Christopher. Burroughs chronicles how he convinced Christopher to move from their urban Manhattan life and settle in a historic home in rural Connecticut. The author has always displayed a talent for sharing sometimes-grim personal dramas with a keen whimsical flair. Unfortunately, the balance is never quite achieved here; the dramatic moments are softly conceived while his narrative often swings in a broader comedic direction. Though the author’s witch revelation feels authentic, some elements of the story undermine the gravity of his tale. These include such chapter headings as “Adder’s Tongue,” “Snake’s Blood,” “Fairie’s Finger,” and “Bat’s Wings” as well as frequent mentions of the 1960s sitcom Bewitched, in which Burroughs compares his experiences to those of Samantha Stevens. The author delivers intermittently intriguing depictions of the quirky local characters they have encountered in the countryside, including redneck handymen, a flamboyant has-been opera singer neighbor, and their real estate agent, who also happens to be a witch. Though we see Burroughs and Christopher struggle through potential hardships, including a tornado and illness, these often feel like contrived plot points allowing for further witty indulgences.

An amusing foray into the witchy realms of Burroughs’ life that lacks the depth of previous memoirs.