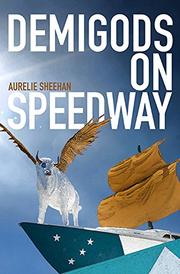 A collection of interrelated stories, set in Arizona, that aspires to a mythic resonance.

Sheehan (Jewelry Box: A Collection of Histories, 2013, etc.) sets her fiction in Tucson (with the occasional glimpse toward Phoenix), where all of these stories and the characters within them seem like “part of a larger order,” though each also stands on its own. Sometimes it’s nothing more than the title—the opening “Olympus Falls,” the closing “Cerberus,” the pivotal “The Lotus Eaters”—that most strongly reinforces the mythic association. The first story introduces the reader to Zero, a man who, like a developer (or a god), “creates something from nothing, wealth from scratch.” He’s one of the few characters of means in a collection where the marginalized dominate. His wife has cancer, and he has an obsessive lust for a younger woman with “[a]n ass of mythological proportions.” In subsequent stories, that woman will become his mistress and even meet his wife, while the insatiable Zero will also commit something between a seduction and a sexual assault on his son’s first real girlfriend. Zero and his demimonde are nowhere to be found in other tales featuring minimum-wage restaurant workers, petty thieves at a car wash and a sorority girl experiencing her initiation into political activism. Geography and climate provide the common denominator: “[I]n Tucson, the sun is commander….The sun is everywhere, in every nook and cranny, and there is no nook or cranny left cool or dim.” It’s a land of “the lascivious heat of spring” and where, too often, “marriage is but a mirage on the horizon.”

The writer's reach seems to exceed her grasp in stories that allude to more than actually happens.