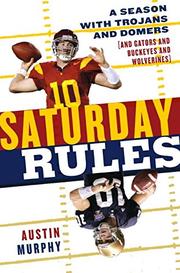 Attention college-football fanatics: If you couldn’t find your way to either the Golden Dome in South Bend or the Swamp in Gainesville last season, never fear, Austin Murphy (How Tough Could It Be?: The Trials and Errors of a Sportswriter Turned Stay-at-Home Dad, 2004, etc.) is here.

College football always has its share of soap-operatic story lines, but the 2006-07 season was about as gripping as it gets. It had enigmatic Coach Urban Meyer overseeing the University of Florida juggernaut, Notre Dame quarterback/golden boy Brady Quinn going through a roller-coaster senior year and the University of Southern California Trojans trying to pick up the pieces in their first post–Reggie Bush/Matt Leinart season. For these college football powers, the year had a compelling natural arc, making their parallel journeys a natural subject for a book-length memoir from an intrepid, fly-on-the-wall reporter. Enter Murphy. Once referred to by Dallas Cowboys behemoth Nate Newton as “that preppy motherf***** from Sports Illustrated,” Murphy wears his love for the sport on his sleeve (or, in this case, on the page). Rather than merely cover the season, he takes a put-the-author-into-the-story tack, a tricky approach that succeeds thanks primarily to his unabashed enthusiasm, unpretentiousness and insider access. Nothing is taken too seriously, which is exactly the way it should be; after all, it’s just a bunch of kids playing ball. The prose is loose, the reportage at times flat-out comedic—think Frank Deford meets Nick Bakay. Murphy also makes the wise choice to periodically step away from college football, reporting on Terrell Owens’s suicide attempt, professional golfers and his fellow journalists. All of which is why you don’t have to be a Trojan, or a Gator, or a Buckeye or even a college football aficionado to appreciate this book—you just have to be a sports fan.

A fun, frenetic memoir of one of the more volatile college gridiron campaigns in recent memory.