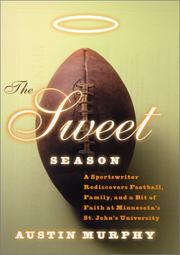 A Sportswriter Rediscovers Football, Family, and a Bit of Faith at Minnesota’s St. John’s College

Sports and human interest intertwine as a man rediscovers the pureness of amateur sports as well as the joys of family life.

Journalist Murphy spends a much-needed sabbatical from his stint at Sports Illustrated by taking his family to rural Collegeville, Minnesota, in order to interact with the coach and players at St. John’s, a small Benedictine college, which happens to have the best record in college football history. Through 2000, the Johnnies have won the conference title 23 times, advanced to the national playoffs 16 times, advanced to the title game 4 times, and have won it 3 times—thanks mainly to its head coach, John Gagliardi, the NCAA’s winningest active coach (second on the all-time list to the retired Eddie Robinson) and a regional celebrity. Gagliardi is a friendly and sometimes elusive, Yoda-like coach who insists that his quarterbacks call their own plays and who hides a strategist’s mind behind an unassuming style. But besides Gagliardi, and talented players such as Tom Linnemann, it is the atmosphere of the school itself that Murphy credits with the success of the Johnnies. At first experiencing some culture shock, Murphy and his family settle into life at this place where the Benedictine monks set the reflective tone and unhurried pace. And while Murphy gets involved with the team, he also reconnects with his wife, Laura, and his two young children. With appealing humor, Murphy recounts how he acquires newfound respect for what his wife goes through on a daily basis and how, in turn, Laura sees in her husband “more of the guy she fell in love with.” The epilogue gives a brief synopsis of the 2000–01 year, when the Johnnies lost to Mount Union in the Stagg Bowl.

More than just a game book of college football, The Sweet Season at the innocent appeal of sports in everyday life.