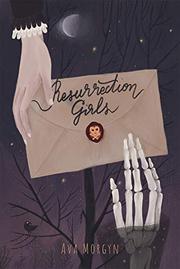 Three years ago, Olivia Foster’s 3-year-old brother, Robby, drowned in the backyard pool while she flirted with her crush, Prescott Peters.

Since then, the pool has been filled in, her mother rarely emerges from her room, her dad’s work hours have mysteriously gotten longer, and 16-year-old narrator Olivia occasionally raids her mother’s prescription pill stash to dull her own pain and guilt as she assumes a lion’s share of the responsibility at home. The scorching Houston summer takes a transformative turn when Kara Hallas moves into the long-vacant house across the street with her cigar-chomping maternal grandmother, Sybil, and flame-haired mother, Rhea. The wild and vibrant Kara is a magnet for everyone, including Prescott, whom Olivia has barely seen since Robby’s death. Friendship, and maybe something more, blooms, and Kara convinces Olivia to help her write letters to death row inmates as the Resurrection Girls, claiming that they’re giving them hope in their last days. A dark and unearthly something simmers in Kara that awakens a fire in Olivia and may be the key to finding a way out of the “endless parade of days” they’ve marched through like “automatons” since Robby’s death. The lovely, assured prose draws on ancient archetypes and a lingering sense of dread to pave the way for a strange but satisfying conclusion. All characters are assumed white (the Hallas family are Greek American).

Morgyn’s supernaturally tinged debut is a heartbreaking but hopeful exploration of death and grief.