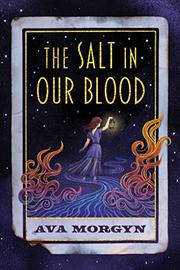 THE SALT IN OUR BLOOD

Plagued by dreams and strange visitors linked to a tarot deck, Cat tries to uncover her mentally ill mother’s secrets.

Cat’s lived with Moony, her maternal grandmother, since her mother, Mary, dropped her off at age 7 with a secret deck of tarot cards. Ten years later, Moony’s death brings estranged Mary back into Cat’s life; she relocates her daughter from Moony’s small Louisiana town to New Orleans, where she works as a tarot reader in the French Quarter. Mary’s severe bipolar disorder has hurt Cat deeply in the past and is depicted in painful, no-holds-barred details. Cat worries about her own sanity, knowing the disease’s genetic component—and because she’s haunted by people resembling the figures from the tarot deck both in dreams and, sometimes, on the streets of New Orleans. With the help of Daniel, her handsome love interest, Cat seeks answers about the people she’s seeing and the inciting trauma that triggered Mary’s illness. She finds far more than she bargained for, learning about old family secrets and devastating crimes and tragedies that her mother survived. The discoveries are well paced, the setting enchanting. Cat, Mary, and Moony are painted as complex characters caught in a complicated dynamic; their believability anchors the otherworldly elements and provides emotional weight to the stakes and resolution. Cat and her family are White; Daniel is a multiethnic Black boy.

An enthralling dive into trauma, mental health, and mother-daughter relationships.