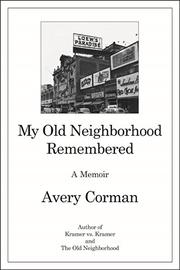 Corman (The Boyfriend from Hell, 2006, etc.) returns to the place he fictionalized in The Old Neighborhood (1980) in this affectionate recollection of his youth.

In the 1940s and ’50s, the Bronx was a safe, diverse and vibrant community. In short chapters, each just a few pages long, the author reminiscences about playing stickball and basketball, rooting for baseball teams, spending long afternoons at one of the neighborhood’s many movie houses, reading comic books in the local candy store, visiting the zoo, trying to learn to ice skate with a friend who wanted to impress a girl, and going to school. Corman was a middling student, good in English and history, struggling in math and science. He recalls with resentment the heartlessness of a few teachers. Although there is a generic quality to many of his recollections, his family life was far from ordinary: His father had abandoned him, his mother and sister when Corman was 5, and he was told while growing up that he was dead. Much later, his mother confessed the truth—that his father had failed financially, run off in shame and even pleaded with his mother to join him when he landed a job in the South. But she refused, and the couple divorced. Corman and his family lived with his aunt and uncle, who were deaf mutes. With no special interests or talents, the author decided to get a business degree with the goal of working in advertising. When he realized that the advertising industry would not hire a Jew from the Bronx, he turned to business writing and then to writing scripts for an educational film company. With the encouragement of a friend, he also worked on his first novel, Oh God!, which he published in 1971.

In 1988, Corman contributed an essay to the New York Times Magazine on his Bronx neighborhood, which he reprints here. Lively and concise, it contrasts with the bland and fragmented quality of the rest of the memoir.