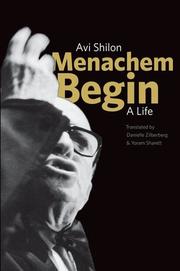 Israel Hayom op-ed page editor Shilon compellingly integrates his subject’s life story and his contributions into the origins and growth of the state of Israel. Born in Brest-Litovsk, Begin escaped after his family was murdered by the Nazis; he was subsequently imprisoned by the Soviets. Released to fight for the Jewish units of the Anders Army, he was deployed to the Palestinian territories. There, he joined the Jewish underground, rising to leadership in the Irgun faction, which was responsible for blowing up the British headquarters at the King David Hotel. Shilon provides a fascinating account of Begin's government service between 1977 and 1983, including what became known as the “Begin doctrine,” under which Israel committed to not allowing “our enemies to develop weapons of mass destruction,” as well as the parallel peace agreement with Anwar Sadat's Egypt, for which Begin was awarded the Nobel Peace Prize. The author’s account of the earlier conflicts over how to fight, who the enemy was, and what Israel would be shows how his subject participated in shaping the political lineups within the country for years after his tenure. Marginalized politically for many years and ridiculed by David Ben-Gurion and members of the Mapai, Begin was recalled from the fringes to government service prior to the outbreak of the 1967 war. Subsequently, he worked closely with Ariel Sharon and a group of generals, who helped him to victory and joined his coalition. Shilon demonstrates how Begin's religious conceptions greatly affected his country's political landscape.

A fully realized, important portrait of a significant 20th-century leader.