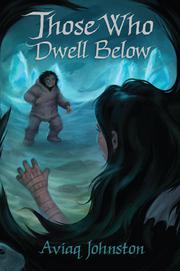 THOSE WHO DWELL BELOW

A young Inuk shaman faces challenges, both human and spiritual, in order to save a nearby village from starvation.

With “dark winter” at its end and spring approaching, Johnston’s (Inuit) follow-up to Those Who Run in the Sky (2017) finds Pitu out of the spirit world, living back among his people as the village’s “soon-to-be new leader and shaman.” But much has changed in his time away. His mentor’s son openly loathes him, and the girl he was once betrothed to is now married. One day, while teaching his little brother to hunt, Pitu receives a vision from Nuliajuk, a “well-known sea spirit,” indicating a nearby village is in trouble. Aided by his “ever-present spirit guide,” a fox named Tiri, Pitu sets off with a hunting party to help. But it will take more than a successful hunt to appease the spirits and bring life back to the community. Not only must Pitu be careful not to lose himself in the process, he must also beware of those in his own group who harbor ill intentions. This contemporary coming-of-age epic easily runs alongside the tales of Kiviuq, the “greatest adventurer known to man” from the Inuit oral tradition. Rich in detail and culturally nuanced, any reader will find the story approachable and connect to its themes of friendship, compassion, and trust. Atmospheric, evocative black-and-white illustrations enhance the text.

An elegant sequel that can dwell on its own.